Figure 11  shows an exemplary method for forming a flexible fiber including a photovoltaic material using a continuous manufacturing process. 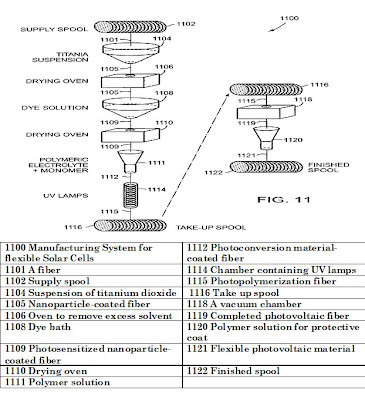 Press releaseFIG. 11 shows a method 1100 for forming a photovoltaic material in the form of a fiber using a continuous manufacturing process. Referring to FIG. 11, a fiber 1101 is provided, for example, by a supply spool 1102. The fiber 1101 may be an electrically insulative fiber corecoated with an electrical conductor, an electrically conductive fiber core, or a combination of both. According to the illustrative embodiment, the fiber 1101 is coated with a suspension of titanium dioxide nanoparticles and poly(n-butyl titanate) (serving as a reactive polymeric linking agent) by passing it into such a fluid suspension contained in a cup 1104 with a small hole in its bottom. Upon exiting the cup 1104, the interconnected nanoparticle-coated fiber 1105 enters an oven 1106 to remove excess suspending medium (e.g., water or other solvent).
If the solvent for the polyelectrolyte is a monomer, it is preferably chosen such that it can be photopolymerized and such that the resulting polymer structure does not detract from the electrical properties of the polyelectrolyte. Hence, in the illustrative embodiment where the solvent includes a monomer, the photoconversion material-coated fiber 1112 is passed through a chamber containing UV lamps 1114, which initiate photopolymerization of the monomer. The resultant fiber 1115 is then coated with the photoconversion material including a solid state electrolyte, and may be readily spooled onto a take-up spool 1116.
The photoconversion material-coated fiber 1115 then passes through or is placed in a vacuum chamber 1118 where a very thin layer of platinum, followed by a transparent, conductive coating of ITO, are deposited on the fiber. The platinum may be, for example, between about 15 .ANG. and about 50 .ANG. thick. The ITO serves as the significant light transmitting electrical conductor. The completed photovoltaic fiber 1119 may then be passed through a polymer solution 1120 to provide a transparent, protective coating, such as by wire extrusion or other means known to the art. Thus a flexible photovoltaic material 1121 is taken up on a finished spool 1122 and is ready for subsequent use in a weaving or matting operation.
on November 25, 2009