A cross section of IBM's DNA Transistor simulated on Blue Gene supercomputer showing a single stranded DNA moving in the midst of (invisible) water molecules through the nanopore. The DNA molecule, at the center of the pore, contain the bases A, C, G and T, that code of biological information necessary for life.

In an effort to build a nanoscale DNA sequencer, IBM scientists are drilling nano-sized holes in computer-like chips and passing DNA strands through them in order to read the information contained within their genetic code.

This advanced research effort to demonstrate a silicon-based “DNA Transistor” could help pave the way to read human DNA easily and quickly, generating advancements in health condition diagnosis and treatment.  The challenge in the effort is to slow and control the motion of the DNA through the hole so the reader can accurately decode what is in the DNA.  If successful, the project could improve throughput and reduce cost to achieve the vision of personalized genome analysis at a cost of $100 to $1,000. In comparison, the first sequencing ever done by the Human Genome Project (HGP) cost $3 billion.

Having access to an individual’s personal genetic code could advance personalized medicine by using genomic and molecular data to facilitate the discovery and clinical testing of new products, and help determine a person's predisposition to a particular disease or condition

A team of IBM scientists from four fields – nanofabrication, microelectronics, physics and biology -- are converging to master the technique that threads a long DNA molecule through a three nanometer wide hole, known as a nanopore, in a silicon chip. A nanometer is one one-billionth of a meter or about 100,000 times smaller than the width of a human hair. As the molecule is passed through the nanopore, it is ratcheted one unit of DNA at a time, as an electrical sensor “reads” the DNA. This sensor that identifies the genetic information is the subject of intense ongoing research. The information gathered from the reader could be used to gain a better understanding of an individual’s medical makeup to help further the pursuit of personalized healthcare.

“The technologies that make reading DNA fast, cheap and widely available have the potential to revolutionize bio-medical research and herald an era of personalized medicine,” said IBM Research Scientist Gustavo Stolovitzky. “Ultimately, it could improve the quality of medical care by identifying patients who will gain the greatest benefit from a particular medicine and those who are most at risk of adverse reaction.”

IBM Research is working to optimize a process for controlling the rate at which a DNA strand moves through a nano-scale aperture on a thin membrane during analysis for DNA sequencing. While scientists around the world have been working on using nanopore technology to read DNA, nobody has been able to figure out how to have complete control of a DNA strand as it travels through the nanopore. Slowing the speed is critical to being able to read the DNA strand. IBM scientists believe they have a unique approach that could tackle this challenge.

To control the speed at which the DNA flows through the microprocessor nanopore, IBM researchers have developed a device consisting of a multilayer metal/dielectric nano-structure that contains the nanopore. Voltage biases between the electrically addressable metal layers will modulate the electric field inside the nanopore. This device utilizes the interaction of discrete charges along the backbone of a DNA molecule with the modulated electric field to trap DNA in the nanopore. By cyclically turning on and off these gate voltages, scientists showed theoretically and computationally, and expect to be able prove experimentally, the plausibility of moving DNA through the nanopore at a rate of one nucleotide per cycle – a rate that IBM scientists believe would make DNA readable.

A human genome sequencing capability affordable for individuals is the ultimate goal of the DNA sequencing and is commonly referred to as “$1,000 genome.”  In the Fall of 2005, IBM revised its corporate privacy and equal opportunity policies to reflect the corporation's intention to handle information about an employee's genetics with a high regard for its privacy, and also to refrain from using genetic test information to discriminate against a person in the employment context.  At that time, IBM was arguably the first company in the world to restrict genetic data from being used to make employment-related decisions.

On May 21, 2008, the United States signed into law the Genetic Information Nondiscrimination Act (GINA) that protects Americans against discrimination based on their genetic information when it comes to health insurance and employment. The bill passed the Senate unanimously and the House by a vote of 414 to 1. The long-awaited measure, which has been debated in Congress for 13 years, is helping to pave the way for people to take full advantage of the promise of personalized medicine without fear of discrimination. 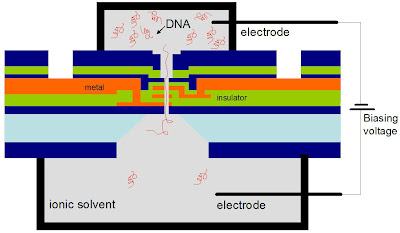 BoeingA membrane containing the nanopore, functionalized with metal contacts (orange) separated by dielectric materials (lime), divides a reservoir into a top part containing an ionic solution with a high concentration of single stranded DNA, and a bottom part, where the DNA will be translocated to. The DNA on the top reservoir is induced to go to the bottom reservoir by the action of a biasing voltage. In the absence of anything else, the DNA would translocate through the pore at a speed of several million bases per second. To control the passage of DNA through the nano-hole, voltages of appropriate polarity (not shown) are applied to the metal contacts inside the pore, which create an internal electric field that trap the DNA. By alternating the trapping voltages applied to the metal contacts, the DNA can be made ratchet from the top to the bottom reservoirs in a controlled way.