A University of Michigan research team has developed a hybrid bioelectrical interface device that could be used to control the next generation of robotic limbs. 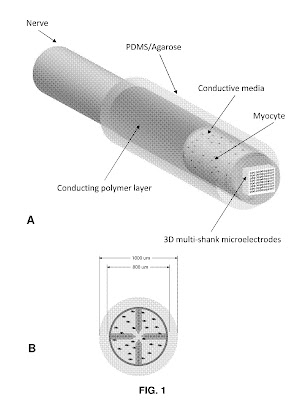 FIG. 1B depicts a graphical representation of an illustrative embodiment of the implantable hybrid bioelectrical interface device showing in cross-sectional view the distal portion of the hybrid bioelectrical interface device illustrating a plurality of abiotic electrodes held by a surrounding framework in proximate contact with the biological component (myocytes) for recording and/or stimulating action potentials through a conducting polymer within the length of the device in accordance with the present technology.

Figure 2  depicts the manufacture of two hybrid bioelectrical interface devices having in which the abiotic component is a cluster of microwires connected to an EED, the biotic component is either an acellularized tissue scaffold or a naturally based hydrogel scaffold both of which can be seeded with dissociated skeletal muscle cells, the conjugated polymer component is either a PEDOT-coated acellularized tissue scaffold or in situ polymerized PEDOT that is polymerized directly within the either acellularized tissue scaffold or naturally based hydrogel scaffold seeded with living muscle cells, the container is a tubular polymer membrane that is filled with a hydrogel matrix which serves as an electrolytes as well as a structural and nutritive support for the muscle cells and implanted nerve. The proximal end of a single motor nerve fascicle is inserted into the open end of the hybrid bioelectrical interface device so that it contacts the muscle cells and the conjugated polymer component of the device 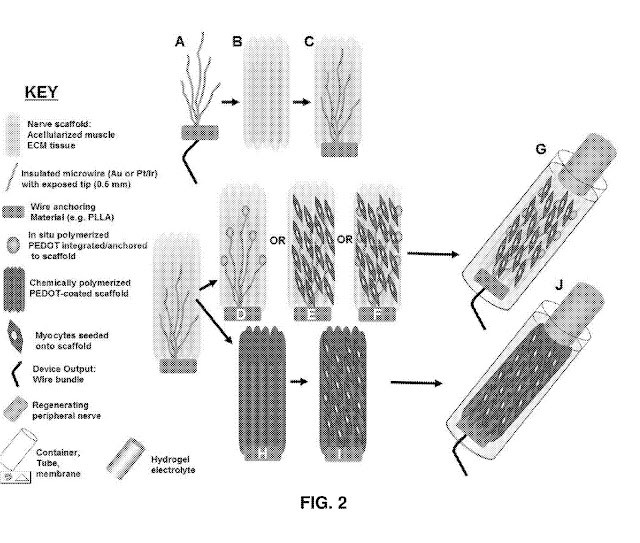 University of Michigan investigators have developed a hybrid bioelectrical interface (HBI) device which can be an implantable device. It is comprised of an abiotic component operable to transmit charge via electrons or ions; a biological component interfacing with the neural tissue, the biological component being sourced from biologic, biologically-derived, or bio-functionalized material; and a conjugated polymer component that together provide a means to chronically interface living neural tissue with electronic devices for extended durations (e.g. greater than 10 years). In some embodiments, conjugated polymers provide a functional electrical interface for charge transfer and signal transduction between the nervous system and an electronic device (e.g. robotic prosthetic limb, retinal implant, microchip), according to a team of inventors led by Associate Professor in the Section of Plastic and Reconstructive Surgery at the University of Michigan  Dr. Paul S. Cederna, Brent M. Egeland, Mohammad Reza Abidian, Antonio Peramo, Melanie G. Urbancheck Daryl A. Kipke, David C. Martin and Sarah Richardson-Burns.

Production of patterned array of microelectrodes needed by the device can be achieved by a variety of microprinting methodologies commonly known in the production of micro-arrays, including, without limitation, by ejecting a plurality of electro-conducting polymers via a multi-line head nozzle, via ink-jetting techniques and the like. They can be patterned using photolithographic and etching methods known for computer chip manufacture. The micromechanical components may be fabricated using compatible "micromachining" processes that selectively etch away parts of the silicon wafer, or comparable substrate, or add new structural layers to form the mechanical and/or electromechanical components.
Micro-electro-mechanical systems (MEMS) based electrodes formed on polymeric supports such as those contemplated in Micro-electro-mechanical systems (MEMS) manufacture can include depositing thin films of conducting material on a support material, applying a patterned mask on top of the films by photolithographic imaging or other known lithographic methods, and selectively etching the films. A thin film may have a thickness in the range of a few nanometers to 100 micrometers. Deposition of electroconducting materials for use as micro or nano electrodes are used in the hybrid bioelectric interace can also include chemical procedures such as chemical vapor deposition (CVD), electrodeposition, epitaxy and thermal oxidation and physical procedures like physical vapor deposition (PVD) and casting.
Conjugated polymers used by the device can be polymerized in the presence of dopants, tissue, cells, cell parts, cellular constituents, other bioactive molecules, viral, plasmid, yeast, dendromer, quantum dot, or micro-nano particle gene delivery vectors, and/or biodegradable micro-nano particles or fibers that are comprised of naturally-derived or synthetic polymers that may be decorated with surface functional groups or molecules intended for interaction with specific cells or molecules in the target effector tissue or may be employed for controlled-release delivery of one or more bioactive molecules, including, but not limited to, neural cell adhesion molecule (N-CAM), neuroglial CAM or NgCAM, TAG-1, contactin-2, myelin-associated glycoprotein (MAG), and deleted in colorecteal cancer protein (DCC); extra cellular matrix adhesion molecules: e.g. laminin, fibronectin, tenascin and perlecan; muscle and/or cell surface markers (CD) molecules and the like