Nano-imprint lithography was initiated as a process to achieve nanoscale features (about 100 nm or smaller) with high throughput and relatively low cost in structures such as molecular electronic devices. During many imprinting processes, the nanoscale features are transferred from a mold to a polymer layer. As non-limiting examples, the mold may be used for a thermal imprint process, as well as for a UV-based imprint process.

In the alternate UV imprint process, a UV-curable monomer solution is used instead of a thermoplastic polymer. The monomer layer is formed between the mold and the substrate. When exposed to a UV light, the monomer layer is polymerized to form a film with the desired patterns thereon.

In some instances, the desirable critical dimension (e.g., at or below 10 nm or at or below 30 nm) of the nanostructure is comparable with the molecule size of the polymeric resist, as such, it may be difficult to achieve uniformity and resolution at the critical dimension. It is further believed that the mechanical strength of polymer resists prevents the formation of a nanoscale pattern with a desirable aspect ratio that is capable of surviving liftoff or etching processes. Still further, techniques such as e-beam lithography, UV lithography, or X-ray lithography may result in significant edge roughness on the patterned polymeric resist, which may be problematic when the patterned features are at or below 30 nm. The method(s) utilize guided molecular assembly or atomic layer deposition, both of which eliminate the use of polymeric resists and enhance feature precision control.

FIG. 1 depicts an embodiment of the method for forming nano-structures. Generally, the method includes establishing a mold having nano-features in contact with a substrate, thereby forming at least one of a channel or a semi-channel, wherein the channel and/or semi-channel is defined at least by an exposed surface of the substrate, an exposed surface of the mold, and a side surface of an adjacent nano-feature of the mold, the nano-features of the mold having a releasing material established thereon, as shown at reference numeral 100; exposing the channel and/or semi-channel to vapor phase assembly or atomic layer deposition to form a layer having a predetermined thickness within the channel, as shown at reference numeral 102; and releasing the mold from the substrate, as shown at reference numeral 104. 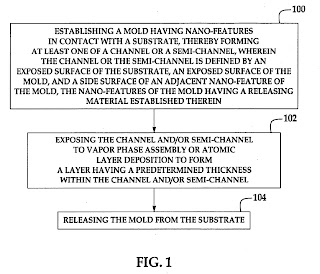