General Electric (GE) Company scientists Sean Michael Sweeney, Sergio Martins Loureiro and Timothy Yosenick developed transparent nano-composite materials and production methods. GE is developing transparent, nano-particle reinforced ceramics for use in windows for optically guided armaments, according to U.S. Patent Application 20090283720. The nano-composite material comprises a matrix material containing particles of a nano-dispersoid, wherein the largest dimension of the particles is less than about 100 nm across the direction of the incoming light.

Many modern armaments use optical guidance systems to acquire and intercept their targets. Such systems often use an optical tracking system based on receiving energy in the mid-infrared region, at wavelengths around three to four micrometers. Examples of such systems include air-to-air, heat-seeking guided missiles, and smart munitions such as guided bombs that track a target by laser back scatter. In all of these devices, it is necessary to protect the relatively fragile optical tracking systems from heat and impact events. Protection of the optics requires the use of a highly impact-resistant window that is suitably transparent in the mid infrared region. These particles may be made from cubic-boron nitride (c-BN), silicon nitride (Si3N4), silicon carbide (SiC), or a combination of these materials

FIG. 1 illustrates a projectile assembly 10 in accordance with exemplary embodiments of GE's current invention. The assembly 10 has, at the forward end thereof, an ogive-shaped nose cone assembly 12, including a transparent, highly impact-resistant window 14 made from materials discussed in exemplary embodiments of the current invention. The window 14 covers and protects optical sensors 16, which may serve for target tracking and acquisition. The projectile body 18 beneath the nose cone assembly 12 may carry an explosive payload. Such projectiles may be used in various types of applications, including heat-seeking, air-to-air missiles, actively targeted free-falling bombs, or optically guided artillery shells, among others. In other embodiments, the materials discussed below may be used to form windows or lenses for use in other types of aggressive environments, such as process instrumentation in high pressure, corrosive, or abrasive application.

Exemplary size ranges and potential nanomaterials are shown in Table 2 as parameter d.sub.max. The table also shows the nanoparticle  percentage of loading in the ceramic matrix The optimum size ranges are calculated to provide maximum transparency in exemplary embodiments of the current invention.  The nanoparticles may be spheres, cylinders, whiskers, or a mixture of these shapes. For these non-symmetric shapes, d.sub.max is defined as the dimension of the longest axis of the particles in the direction of the light transmission. Nano whiskers are generated by ball milling longer fibers during production of the materials. 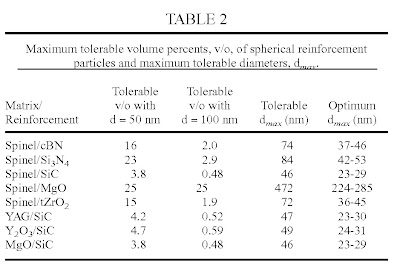