After years of struggle and fierce international competition Danish and Swiss scientists succeeded in splitting electron pairs from superconductors using nanowires. Their sensational results were published in October in the scientific journal Nature.

Behind the data, together with researchers from the University of Basel in Switzerland, is Associate Professor Jesper Nygård, leader of the nanophysics section at the Nano-Science Center, Niels Bohr Institute, University of Copenhagen: "The results are very fundamental and are ground-breaking for new experiments in quantum mechanics. It has been a hard struggle for the last 10 years to reach this point and now it has finally succeeded", says a happy Jesper Nygård.

In superconductors the electric current flows without any resistance. It has been known for decades that the current is carried by electrons that are tightly bound in pairs. These electron pairs, so-called Cooper-pairs, can be compared to identical twins. In addition to looking alike, identical twins can have mental features in common. For electron pairs the similarity is even more extreme: even when they are physically separated, their fates are strongly entwined.

Schematic illustration of the Cooper-pair splitter. 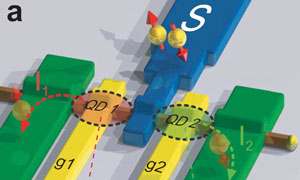 Two electron twins from a superconductor (blue) are split at a T-junction and run in opposite directions in the nanowire (brown). They end in separate electrodes (green), whichmeasure an electronic current.

By coupling a small superconductor to an ultrathin nanowire the researchers succeeded in separating the Cooper-pair from the superconductor. The two electrons run in opposite directions along the nanowire. The electrons each run in opposite directions at a nanoscale T-junction, but are still 'mentally connected' or 'entangled', as it is called in the jargon of quantum mechanics. Thus, the researchers can influence one of the electrons and see a reaction in the other, even though the pair is physically separated.

The split electron pair functions as a kind of building blocks in quantum mechanics. Therefore researchers now have the possibility of performing a series of new quantum mechanics experiments with the physically separated, but ”entangled” twin electrons. Nanowires, which researchers have used to split the Cooper-pairs, also hold great potential.

"Physicists have tested many different materials for the experiments, but in the end nanowires proved to be the most ideal material to couple with the superconductor. In Copenhagen we had a great deal of expertise in production of nanowires. Our contributions have therefore been the wires, while the measurements were carried out by the University of Basel", explains Jesper Nygård.

Since 2005 Ph.D. Claus B. Sørensen, Nano-Science Center, Niels Bohr Institute and Martin Aagesen, CEO of SunFlake A/S have worked to develop the cultivation of nanowires. The researchers use an advanced instrument, called MBE – Molecule Beam Epitaxy. The instrument is located at the Danish III-V Nanolab, which the Niels Bohr Institute and Technical University of Denmark run in collaboration.

Until just a few years ago no one knew the MBE instrument could create the extremely thin nanowires. Today the researchers use the Danish wires both in the firm SunFlake A/S for prototypes of new solar cells and in sensors for the medical industry.