Artistic rendering of AFRL-sponsored, University of Texas at Dallas efforts to create a carbon-nanotube-based artificial muscle for Air Force aerospace and space applications. 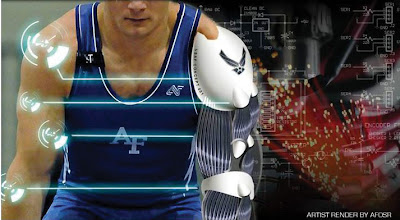 Research on a new kind of carbon nanotube artificial muscle for Air Force aerospace and space applications, conceived and invented, at the University of Texas at Dallas (UTD) is receiving primary financial support from the Air Force Office of Scientific Research (AFOSR).

Dr. Ray Baughman, director of the NanoTech Institute at UTD, and his team of researchers have been working on artificial muscles for more than twenty years. The current phase of his pioneering work stems from an exploratory research program supported by AFOSR program manager, Dr. B-L "Les" Lee since 2006. The team invented many new types, including electrochemical carbon nanotube and conducting polymer muscles, as well fuel-powered muscles. The latter, powered chemically by alcohol or hydrogen, operate similarly to natural muscles. But they are limited in that they cannot function at extreme temperatures and have low efficiencies for energy conversion.

The nano-based muscles, which are 30 times stronger than natural muscles are made of very thin sheets of nanotubes (1/10,000th of the diameter of a human hair) that on a weight basis are "strong as steel" in one direction and as elastic as rubber in two other directions.

These non-electro chemical carbon nanotube artificial muscles can operate at extreme temperatures, which makes them especially attractive for space applications. They are also being viewed as a means for endowing soldiers with super-human strength through the use of exoskeletons, which would be advantageous in battlefield emergencies. Artificial muscles may also be used to actuate "smart skins," which would give Air Force aircraft the ability to change their appearances in situations of danger.

"We want to use the carbon nanotube sheets to affect the boundary layers on Air Force micro air vehicles and even larger vehicles to provide a new type of controllability and increase flight efficiency," Baughman said.

"The carbon nanotube aerogel sheets are a remarkable state of matter that show rubber elasticity, and they are lighter than air. The sheets rise in the air like smoke," said Baughman who remains amazed by their properties.

Whereas natural muscles can achieve about 20% contraction per second, artificial muscles can contract approximately 30,000% per second. The UTD team's nanoformed muscles, which are 30 times stronger than natural muscles, comprise very thin aerogel sheets of carbon nanotubes (with each tube 1/10,000th the diameter of a human hair). Nanomuscle activation occurs via injection of a small positive charge into these sheets, which repulses other positive charges therein. On a weight basis, the synthetic muscles are as strong as steel in one direction and as elastic as rubber in two other directions.

Their inherent combination of strength and flexibility enables these nonelectrochemically based, carbon-nanotube-constructed muscles to operate at extreme temperatures, making them especially attractive for space applications. Further, the technology is receiving attention as a possible means for endowing soldiers with superhuman strength through the use of exoskeletons, which would be advantageous in battlefield emergencies. The artificial muscles may also find a niche in the actuation of aircraft "smart skins," which enable aircraft to morph their appearance in situations of danger. If researchers pursuing this particular possibility are able to employ the exceptionally elastic, lighter-than-air carbon nanotube sheets to affect the boundary layers of micro and larger air vehicles, they will ultimately have facilitated a new type of controllability and increased flight efficiency.

Up ahead, scientists expect these latest man-made muscles to have very large response rates that as of right now are not possible.  "To use our muscles of this type to generate large forces, we must learn how to assemble hundreds of the individual sheet strip muscles to make ones having large cross-sectional areas," he said.

In addition to AFOSR, funding is being provided by the Office of Naval Research, the Strategic Partnership for Research in Nanotechnology, and the Robert A. Welch Foundation.