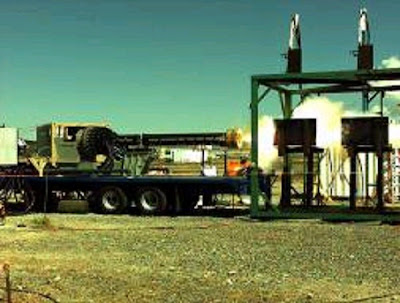 These tests were performed at the US Army Dugway Proving Grounds under a contract with the Office of Naval Research. Testing is scheduled to continue through to the second quarter of next year and will culminate with the launch of tactically relevant aerodynamic rounds, GA-EMS says in a statement.

With a muzzle velocity of more than twice that of conventional systems, Blitzer provides significant increases in standoff and lethality at lower cost without the need for propellant or high explosives.  "These tests are an important first step toward demonstrating the viability of a revolutionary technology that will significantly improve the safety and protection of our warfighters at sea and on land," says GA-EMS Division Vice President R. Scott Forney III.

Last year, the U.S. Navy tested a railgun which at full capability will be able to fire a projectile more than 200 nautical miles at a muzzle velocity of mach seven and impacting its target at mach five. In contrast, the current Navy gun, MK 45 five-inch gun, has a range of about 13 miles. The high velocity projectile will destroy its targets due to its kinetic energy rather than with conventional explosives.

The U.S. Navy would be able to launch shells into space and still hit within 5 meters of the target.


Railgun technology uses high-power electromagnetic energy instead of explosive chemical propellants (energetics) to propel a projectile farther and faster than any preceding gun. 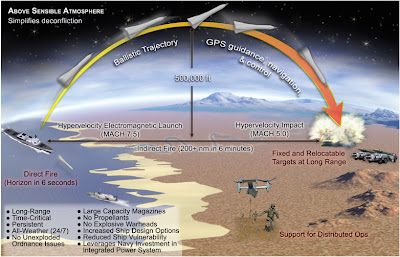 ADM Roughead noted, “We should never lose sight of always looking for the next big thing, always looking to make our capability better, more effective than what anyone else can put on the battlefield.” He went on to emphasize, “I never ever want to see a Sailor or Marine in a fair fight. I always want them to have the advantage.”

ONR’s EMRG Program is part of the Department of the Navy’s Science and Technology investments, focused on developing new technologies to support Navy and Marine Corps war fighting needs.

What types of targets can the EMRG be deployed against?  Currently, plans call for developing three different rounds for the EMRG: a unitary round for engaging “hard” targets such as prepared positions, bunkers, and buildings; a rod-dispensing round for vehicle targets; and a pellet-dispensing round for personnel targets. 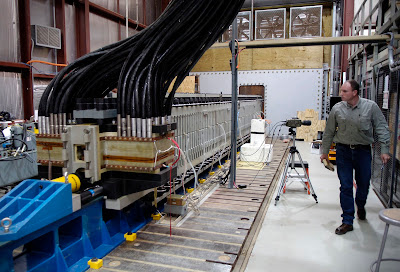 The Navy’s partners on this project are:


The planned timeframe of having a deployable weapon system is by 2020-2025 with a working prototype around 2016-2017.  The Navy is working on understanding railgun system impacts for ships of different sizes. Integration could occur on new vessels or by retrofitting on existing platforms.

The most important developments that will take place during the lifetime of the railgun Innovative Naval Prototype program fall into four key categories: the materials that will comprise the bore and containment system of the launcher; the projectiles; the pulsed-power network; and ship integration.

The projectile will have a guidance system and travel at 7500 mph when launched. Compare with SR-71 (mach 3.5 maximum -- 2,500 mph) and launch of the Space Shuttle (two minutes into the ascent, the space shuttle is about 45 kilometers [28 miles] above the earth's surface and is traveling nearly 5000 kilometers per hour [3,000 mph]).

Without any kind of warhead, how will a non-explosive projectile cause any real damage?  With an impact speed of Mach 5, a projectile will use kinetic energy alone to destroy a target. In essence, damage is caused by the thousands of fragments -- each one of them traveling at lethal velocities -- created by the impact of each projectile.

The ONR website has video of a demonstration of a prototype capable of delivering a 10 megajoules (a measurement of energy) shot.