Pixelligent Technologies LLC (College Park, MD) reveals programmable photolithographic masks based on semiconductor nano-particle optical modulators in U.S. Patent 7,605,390.   Nano-particles provided with control circuitry are used to form the programmable masks. The optical characteristics of the nano-particles can change to provide patterned light. Such patterned light can be used to expose a photoresist on a semiconductor wafer for photolithography, according to inventors Zhiyun Chen, Gregory D Cooper, Serpil Gonen and  Erin F. Flee.

The following figure illustrates the on and off states for Pixelligent's programmable mask. 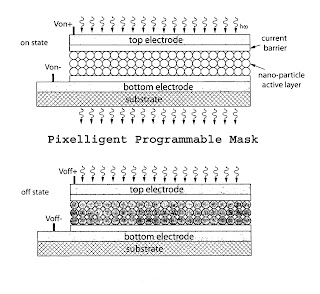 The process for operating an electrically modulated programmable mask for optical lithography includes the following steps: (1) Illuminating, with a light of one of the lithographic wavelengths of 248 nm, 193 nm or 157 nm, a sapphire substrate containing electrical control circuitry, and further having at least a thin layer of semiconductor nano-particles with a bandgap disposed on a portion of the substrate.  The bandgap corresponds to the energy of the individual wavelength. (2) By applying a voltage or current to the nano-particles in the thin layer it is possible to change transparency thereby controllably absorbing or transmitting light at the lithographic wavelengths of 248 nm, 193 nm or 157 nm.  The nano-particles provide optical modulation at each wavelength; and can expose a semiconductor wafer with a spatial light pattern responsive to the applied voltage or current.

Pixelligent inventors Zhiyun Chen, Gregory Cooper, Serpil Gonen and Erin Flee realized that it would be especially useful to fabricate an array of optical modulators based on semiconductor nano-sized particles for use in photolithography and other applications. Programmable photomasks made from arrays of nano-particle based optical modulators include control circuitry to control each modulator. In such an array, the active parts of the modulators can be formed by nano-sized semiconductor particles, which may be organized in a variety of ways, including colloidal, compressed solid, or quasi-crystals. In such modulators, the intensity and/or phase of light transmit through or reflected by them can be controlled by applying an electrical field to these modulators.