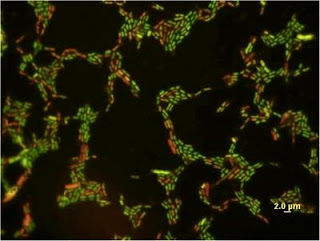 Figure: This is a magnification of E. coli exposed to a low concentration (10 mg/L) of titanium dioxide nanoparticles. Cells with compromised membranes are stained red.


The Skin Deep Environmental Working Group is tracking more than 2750 personal care products that contain either nano-titanium dioxide or nano zinc oxide in their Cosmetic Safety Database including moisturizers, eye liners, lip sticks, make-up foundations, soaps, sunscreens, mascara, nail polish. NANO TITANIUM DIOXIDE is found in 2,146 products and NANO ZINC OXIDE (20-60nm) is found in 666 products. Although research has just begun into the safety of many nano-materials, some research suggest that nano titanium dioxide and nano zinc oxide could be carcinogenic and affect the reproductive system. Nanometer is abbreviated as nm and is 1/billionth of a meter, about 100,000 times smaller than the width of a human hair.

Nano Titanium Dioxide (TiO2) offers greater sun protection than larger titanium particles. Comparatively little is known regarding potential health effects of nanoparticles. They do not penetrate healthy skin, and thus appear to pose a low health risk in lotions. Inhalation of powders and sprays is a concern. Research suggests that nano titanium dioxide produces excess reactive oxygen species that can interfere with cellular signaling, cause mutations, lead to cell death and may be implicated in cardiovascular disease. One or more animal studies show biochemical changes at very low doses where the human health implications are not yet well understood

Given the incomplete information made available by companies and the government, EWG provides additional information on personal care product ingredients from the published scientific literature. The chart below indicates that research studies have found that exposure to this ingredient -- not the products containing it -- caused the indicated health effect(s) in the studies reviewed by Skin Deep researchers. Actual health risks, if any, will vary based on the level of exposure to the ingredient and individual susceptibility -- information not available in Skin Deep.

Environmental Canada Domestic Substance List includes suspected effects on the reproductive system by nano zinc oxide and it is classified as expected to be toxic or harmful and as a possible carcinogen. Association of Occupational and Environmental Clinics found strong evidence that nano zinc affects the human immune system and is a respiratory toxicant. The California EPA, Office of Environmental Health Hazard Assessment found limited evidence of immune system toxicity. Nano zinc oxide is also persistent or bioaccumulative in the environment and is of moderate to high toxicity concern in humans Environmental Canada Domestic Substance List Persistent also includes nano zinc oxide as bioaccumulative in wildlife.

Using aquatic microbes as their "canary-in-a-cage," scientists from Ohio reported at the 237th National Meeting of the American Chemical Society that nanoparticles now being added to cosmetics, sunscreens, and hundreds of other personal care products may be harmful to the environment. The study by Cyndee Gruden, Ph.D. and Olga Mileyeva-Biebesheimer focused on nano-titanium dioxide (nano-TiO2) particles found in cosmetics, sunscreens, and other personal care products. The particles are added to those products for their highly beneficial effects in blocking ultraviolet light in sunlight. Excess exposure can cause premature aging of the skin and skin cancer.

Gruden, who is with the University of Toledo, explained that the particles are washed down the drain in homes as people bathe and end up in municipal sewage treatment plants. From there, they can enter lakes, rivers, and other water sources where microorganisms serve essential roles in maintaining a healthy environment.

"When they enter a lake, what happens?" Gruden asked. "Would they enter an organism or bind to it? Maybe they kill it — or have nothing to do with it at all. These are important questions for determining the effects that nanoparticles may have on the environment. Right now, we're not really sure of the answers."

Gruden studied survival of Escherichia coli (E. coli) bacteria when exposed in laboratory cultures to various amounts of nano-TiO2. She found surprisingly large reductions in survival in samples exposed to small concentrations of the nanoparticles for less than an hour. "How fast the impact was surprised me," she said. The findings open the door to future research, including studies to determine whether the same effects occur in the natural environment.
Gruden's method for pinpointing damage from nanoparticles uses fluorescence to identify when the cell membrane in microbes undergo damage. When membranes — a crucial part of the microbe — are damaged, the cells emit a faint red glow. "Methods based upon fluorescence allow us to obtain results faster, maybe with greater sensitivity," she said, adding that this approach could speed scientific efforts to understand the threshold at which nanoparticles become toxic to microbes.

In a second study on nanotoxicity at the ACS National Meeting, scientists from Utah described development of a new biosensor that flashes like a beacon upon detecting nanoparticles in the environment. Anne Anderson and colleagues at Utah State University and the University of Utah have inserted genes into a strain of Pseudomonas putida (P. putida) — a beneficial soil microbe — so that it emits light upon contact with nanoparticles of heavy metals. They are with Utah State University. The bacteria glow brightly when it is in its normal healthy state. The glow dims upon exposure to toxic substances.

"The novelty of the biosensor is we're able to get responses very, very quickly," she said, "and we can get those answers in the absence of other factors that could bind the challenging compounds." Anderson noted that traditional approaches in measuring bacterial cell growth may take two days. "At the snap of your finger you can see some of these things take place."

Anderson's group discovered that P. putida cannot tolerate silver, copper oxide and zinc oxide nanoparticles. Toxicity occurred at levels as low as micrograms per liter. That's equivalent to two or three drops of water in an Olympic-sized swimming pool. Anderson warns it could spell danger for aquatic life. "If you look up the Environmental Protection Agency's risk level of Copper to fish and other aquatic organisms, you are at that point of toxicity."

There's much debate in the science community about nanoparticle toxicity, Anderson said. Some scientists believe that nanoparticles in nature will aggregate together or bind onto silt and/or other organic matter, greatly reducing their toxicity. "We don't know if that's true or not," she said. So other members of this Utah research group currently are investigating that aspect of the issue.

Although the public is ultimately responsible for understanding the risks of consumer products, Gruden said, science plays a large role in highlighting possible hazards. "It is the scientist's job to perform good research and let the findings speak for themselves," she said. And so far the promises of nanotechnology need more evaluation. "To date, it's unclear whether the benefits of nanotech outweigh the risks associated with environmental release and exposure to nanoparticles."