University of Louisville Institute for Advanced Materials and Renewable Energy (IAM-RE) Director Dr. Mahendra Kumar Sunkara and Intel Process Engineer Gopinath Bhimarasetti developed a technique to synthesize, control and fine tune the morphology of tubular carbon nano structures. Their invention provides a means to control the inner and outer diameter of the tubes and provides the means of controlling the wall thickness of the tubes. Different morphologies of tubular carbon such as tubes, cones, nozzles, funnels, tapered tubes, barbells, Y-junctions and multijunction tubes, can be synthesized reliably. The technique is based on the wetting behavior of gallium with carbon in different gas phase growth environments.

The walls of the various nanocarbon shapes exhibit a very unique structure. Unlike multi-walled carbon nanotubes (MWNTs), the wall is not comprised of graphene sheets rolled into a cylinder. Instead, the wall is made of parallel sets of nanocrystals of graphite in the size range of 2-5 nanometers (nm). The internal diameters of the carbon tubular structures can be varied from a few nm to as high as about 25 microns. The wall thickness is about 10-20 nm. The carbon tubular structures can be formed open on both ends and are directly applicable to micro-fluidics. 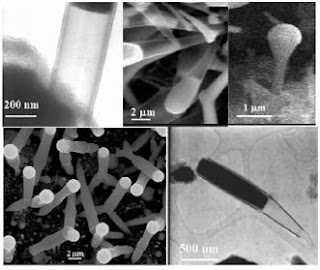 The figure illustrates a variety of shapes created by using methane as a carbon source and gallium as the wetting agent. The University of Louisville Research Foundation, Inc. (Louisville, KY) received U.S. Patent 7,597,941 for the work.

The carbon tubular structures have use as nano fluid delivery systems, absorption and percolation medium, electronic devices such as junction diodes made of multi-junction tubular structures, lithium exchange medium in batteries, ink delivery systems for printer cartridges, and hollow funnels or nano-crucibles for metal alloy production permitting the containment and handling of very small amounts of material such as for combinatorial synthesis, and for micro-reactors for combinatorial synthesis.

The process is based on changing the wetting behavior of a low melting metals such as gallium, indium, and aluminum with carbon using a growth environment of different gas phase chemistries. In the presence of oxygen or nitrogen, gallium wets carbon, thus forming a flatter meniscus during growth. Based on this behavior of gallium various morphologies of carbon nano-structures can be successfully controlled and synthesized. Gallium that partially fills the carbon structures can be removed from the tubes by simple heating in vacuum at temperature above 600.degree C. Gallium required for the growth of the carbon tubes can be supplied either as a thin film on the substrate or could be supplied through the gas phase with different precursors such as Tri-methyl gallium.

The nanostructures can be synthesized using any kind of gas phase excitation such as microwave excitation, hot filament excitation, thermal excitation and Radio Frequency (RF) excitations. This growth concept can be extended to synthesize tubular morphologies of other material systems.
on October 07, 2009