Catalytic Materials LLC (Pittsboro, NC) researchers Terry K. Baker and Nelly M. Rodriguez discovered how to make multi-faceted multiwall carbon nanotubes with crystallinities ranging from greater than 95% to substantially 100% as well as other nanocarbon forms by controlling temperature in the presence of specific catalysts. Carbon nanostructures are generally prepared by reacting the powdered catalyst in a heating zone with the vapor of a suitable carbon-containing compound. While the art teaches a wide variety of carbon-containing compounds as being suitable for the preparation of carbon nanostructures, the inventors found that only a mixture of CO and H2 will yield carbon nanofibers with unexpectedly high crystallinities and in the unique structures of nanofibers of their invention in the temperature range of about 550 degree C to about 725 degree C.

Catalysts used to prepare the carbon nanofibers are bulk metals in powder form wherein the metal is selected from the group consisting of iron, iron-copper bimetallics, iron-nickel bimetallics and also cobalt-magnesium oxide mixtures. It is well established that the ferromagnetic metals, iron, cobalt, and nickel, are active catalysts for the growth of carbon nanofibers during decomposition of certain hydrocarbons or carbon monoxide. Efforts are now being directed at modifying the catalytic behavior of these metals, with respect to nanofiber growth, by introducing other metals and non-metals into the system. In this respect, copper is an enigma, appearing to be relatively inert towards carbon deposition during the CO/H2 reaction. Thus, it is unexpected that Fe or the combination of Cu or Ni with Fe would have such a dramatic effect on carbon nanofiber growth in the CO/H2 system in the temperature range of about 550 degree C to about 725.degree C. For the cobalt-magnesium oxide system the preferred temperature range is 580 degree C. to about 600 degree C. Iron-nickel catalysts and cobalt-magnesium oxide are preferred for preparing the carbon nanostructures.

The following figures illustrates the various shapes formed by Catalytic Materials, LLC’s patented process as well as the temperatures at which certain shapes are formed as revealed in U.S. Patent 7,592,389. 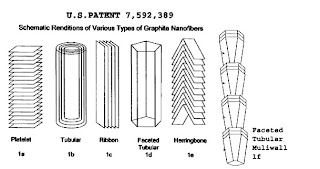 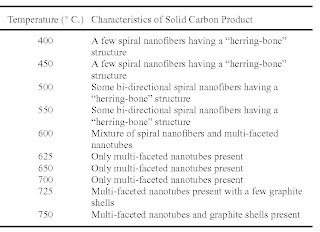 (click on images to enlarge and for greater clarity)

FIG. 1a is a representation of a platelet carbon nanofiber, which is comprised of substantially graphite sheets that are substantially perpendicular to the longitudinal axis, or growth axis, of the nanofiber.

FIG. 1c is a representation of a ribbon carbon nanofiber comprised of non-connected graphitic sheets that are aligned face-to-face and substantially parallel to the longitudinal axis of the nanofiber.

FIG. 1d is a representation of a faceted tubular carbon nanofiber and is comprised of continuous sheets of graphic carbon but having multifaceted flat faces. The graphitic sheets are also substantially parallel to the longitudinal axis of the nanofiber.

FIG. 1e is a representation of a herringbone carbon nanofiber wherein the graphitic platelets or sheets are at an angle to the longitudinal axis of the nanofiber.

The carbon nanofibers can be dispersed in a polymer by various well-known techniques such as melting and kneading to form an admixture that can be subsequently shaped to form an electrically conductive article. Multi-faceted carbon nanotubes are more conductive electrically than cylindrical carbon nanotubes. The use of conductive nanofibers is highly desirable since a given weight of such a material generates a large number of contact points within a polymer matrix. The widespread interest in electrically conductive polymers is stimulated by the possibility that such materials can have utility in such things as semiconductor chips, integrated circuits, lightweight battery components, sensors, electro-chromic displays, anti-static coatings, static dissipation, electromagnetic and radio-frequency interference shielding, fuel hoses, connectors and packaging items. It is well established that the incorporation of certain types of carbon nanofibers into polymeric materials can impart electrical conductivity to such materials that are generally regarded as insulators.
on October 04, 2009